Paul Carvill joined us on Wednesday to explain the programme to the children and to get us started.  The aim of the programme is to get all our kids active, fit and healthy.  Everyone seemed to enjoy the session and we managed to get ten minutes on Friday without rain to do our first 'Killer K'.

St. Patrick's PS recently competed in the Academy Cup, a girls and boys GAA tournament. The boys were narrowly defeated by St. Joseph's, Galbally, whilst the girls were beaten by St. Colmcille's, Carrickmore in the final. Both teams played great football. Well done to all!

St. Patrick's PS recently ran their 2017 GAA netball and GAA tournament. A huge thank you to all the schools that attended: St. Joseph's, Galbally; St. Mary's, Pomeroy; St. John's, Moy; St. Mary's, Cabragh; Edendork; St. Teresa's, Loughmacrory and St. Patrick's, Ardboe. Once again there was great competition in both GAA and netball. In netball, St. Patrick's, Donaghmore won the Faloon Cup with St. Mary's, Cabragh winning the JPM runner up cup. In football the Brendan McCann memorial cup was won by Loughmacrory with Ardboe runners up. The shield competition was won by St. Joseph's, Galbally and they received the Faloon Cup with St. Mary's,Cabragh coming runners up.

A huge thank you you to our sponsors, JPM trailers, Faloon solicitors and the McCann family. Thanks also to those who joined us to help referee and to Mrs Falls who catered for us so well. Thanks also to Torrent Complex for hosting our event.

Year 7 did a tour of Dungannon Library and became more familiar with the services that they provide. They had a research workshop where they had to find out a range of information about the Irish Famine and the workhouse in Dungannon. Then it was off to Ranfurly House where they got to experience what life was like in the workhouse. After meeting with Mrs. McKinley, the formidable matron of the workhouse, I think they were very happy to return to school with Mrs. Ferguson and Mrs. Falls.

A huge congratulations to all the Year 7 children who were confirmed last night.  It was a lovely celebration.  Photos to follow soon.

A Business Visitor to our Classroom - A huge thank you to Tara Grimes who very kindly took time out of her busy schedule to talk to the P7 children about running a business. Tara was inspirational and gave the children great advice and encouragement. They are motivated, excited and dying to get started on their business venture.

Our Faith Friends (A-level Religion pupils from St. Joseph's Grammar School) joined us this afternoon to help us with our preparation for Confirmation. Thank you

The Year 7 class have had a great start to their week with a variety of successes to report. A huge congratulations to our road safety quiz team who won the Mid Ulster competition and narrowly missed out on 3rd place in the Ulsster finals on Monday night in Belfast. Our boys soccer team were winners of the Tri- County soccer heat today. Well done boys! Also today the girls beat stiff competition to win their heat of Cumann na mBunscoil indoor GAA and join the boys in qualifying for the County final. Fantastic girls!

Allianz Cumann na mBunscol Thir Eoghain today held the second heat of six scheduled heats in the annual 5-a-side Girls’ Indoor Gaelic Football for Tyrone primary schools in Cookstown Leisure Centre. A total of 10 schools competed for the honour of winning this particular heat. The format of the day’s play saw the 10 team captains select a number to draw their schools into one of two sections. As was the case yesterday, an extremely high level of skill and sporting behaviour was exhibited from all involved.

Section ‘A’ contained teams from the local Holy Trinity P.S. Cookstown; St. Mary’s P.S. Lisbuoy, Carland, and St. Mary’s P.S. Stewartstown. These gallant girls gave it their best shot in an effort to progress further in the tournament, but fell just short of their target. Instead, an unbeaten St. Patrick’s P.S. Donaghmore (7 pts) and St. Joseph’s P.S. Killeenan (6 pts) set the pace and finished the section as group winners and runners-up, respectively.

The first semi-final was a local derby pitching the hitherto unbeaten Donaghmore girls (Section ‘A’ Winners) with ‘B’ runners-up: Galbally. Unfortunately for the young Galbally team, they came up against a rampant Donaghmore side who maintained their unbeaten record with a 3-0 win, and a place in today’s final. Hard luck to the Galbally girls and Mr. Kelly – you had a great tournament.

The second semi-final was an altogether different affair. Indeed, with the final score at 2-2, extra-time was required to separate the girls from Rock (Section ‘B’ winners) and Killeenan (‘A’ runners-up). Mr. McKenna saw his Kildress girls bag the winning goal and, consequently, a place in the heat final. The Sacred Heart girls (coached by Mrs. Lynn Cush) certainly didn’t lack for skill or desire – well played! However, the scene was now set for our heat final.

The final was to prove a real cracker between St. Patrick’s P.S. Donaghmore (coached by Mrs. R Ferguson and Mrs. D Cahalane) and St. Joseph’s P.S. Killeenan. Extra-time would be required to separate our finalists.

As things transpired, it was a late goal from Donaghmore that won the match on a 3-2 AET scoreline. Tough luck on a brave, talented Killeenan team. As for the victors, St. Patrick’s P.S. Donaghmore had now secured themselves a place in the county final to be held on Friday 3 March in Cookstown’s MUSA Indoor Arena. Here they will join 5 other qualifying schools in a bid to be crowned Tyrone Champions – we wish them all well.

St. Patrick's PS netball team who were runners up in the Tri County netball league 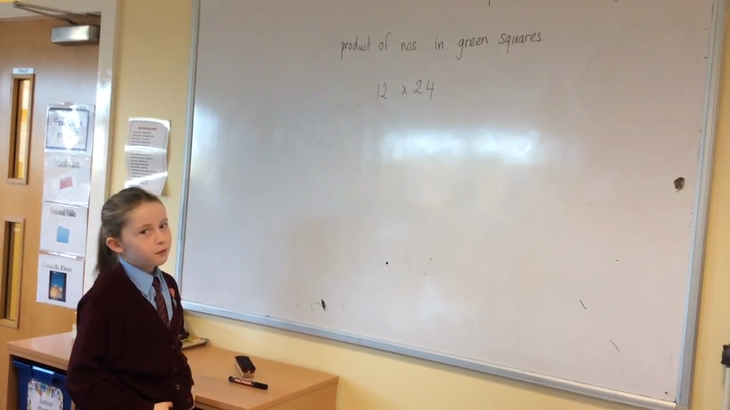 Year 7 pupils explain how they worked out their answers. 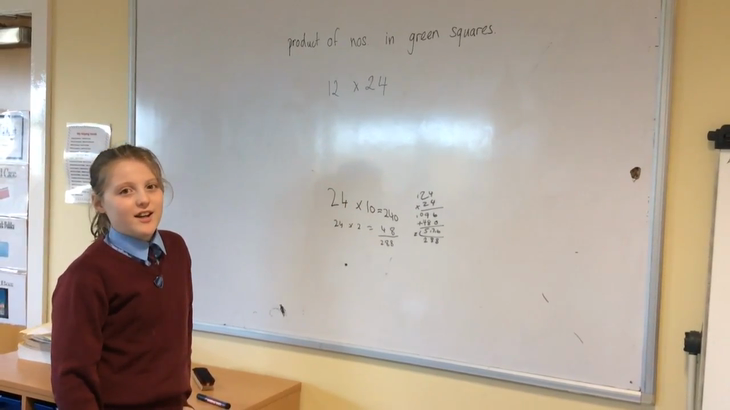 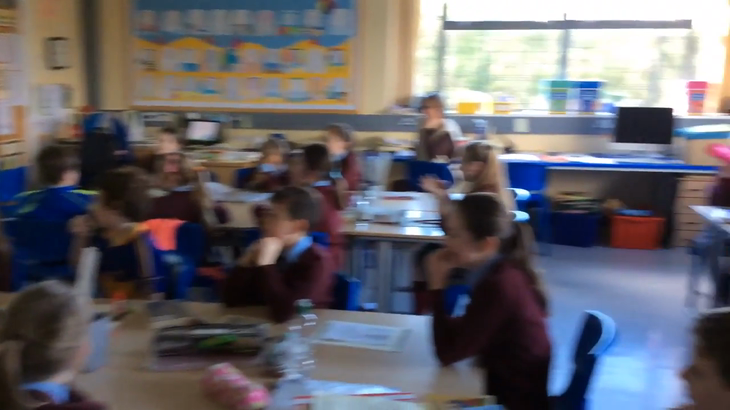 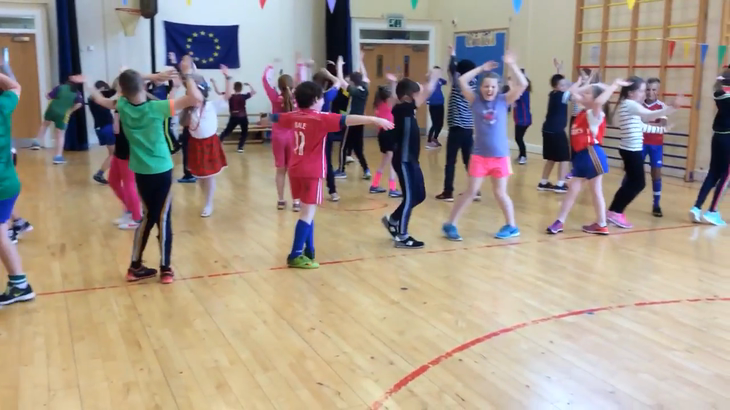 Good to see Year 7 pupils haven't forgotten their moves. A great way to finish up a Friday! 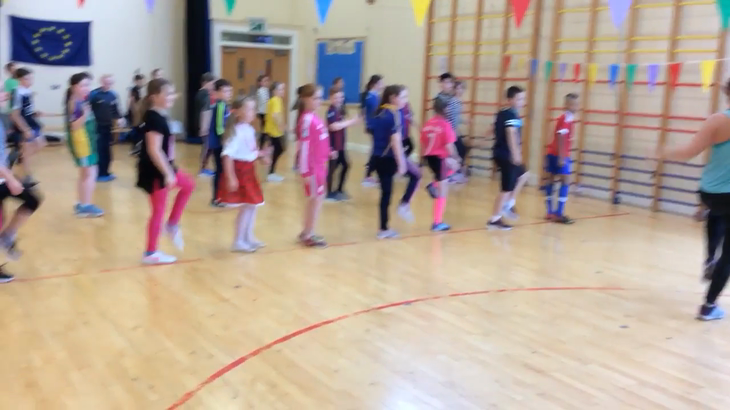 Year 7 pupils working with Louise and Paula to make miniature fairy paverol art figurines which will be used to decorate the school grounds. This is part of the 'You, Me and Our World' project being completed through 'Beam.'

Well done to our netball team who were presented with the Tri-county League Shield today. In today's blitz they finished top of their section with two other schools but didn't qualify for semi-final due to goal difference. They were super!!

Year 7 children are starting a 'Helping Hands' programme for PDMU. The aims and objectives of the programme are outlined in the attached document.

Year 7 children reading with their Caras from Year 1

Visit the gallery area to view photos from Confirmation.
Believe and Achieve
Top

Unfortunately not the ones with chocolate chips.

Some cookies are necessary in order to make this website function correctly. These are set by default and whilst you can block or delete them by changing your browser settings, some functionality such as being able to log in to the website will not work if you do this. The necessary cookies set on this website are as follows:

A 'sessionid' token is required for logging in to the website and we also use a 'crfstoken' token to prevent cross site request forgery.

Cookies that are not necessary to make the website work, but which enable additional functionality, can also be set. By default these cookies are disabled, but you can choose to enable them below: